Views of Organizations – Mechanistic or Humanistic?

During conversations with various individuals about Agile organizations, I realized that, more often than not, there are two main ways they seem to think about them:

When people take a mechanistic view of an organization, they believe it can successfully and exhaustively be described through its structure and processes. There are clear inputs and outputs that can and should be measured (and shown on dashboards). Clear correlations and relationships exist and metrics are driven through use of known “levers”. Order is created by following consistent processes and best practices. The people that make up these organizations are “resources” and certainly play an important role, but at end of the day it’s about hiring, training, retaining and measuring engagement. This world has clear rules and could be described by a good deterministic model with underlying predictable formulas and mechanisms. At its foundation, this view of organizations is rooted in Taylorism and management principles from the industrial revolution. 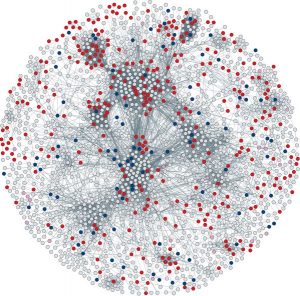 On the other side of the spectrum, we find individuals thinking of an organization in humanistic terms. Organizations are organic and the sum of the individuals and teams they are made up of. These “cells” form an organism that often doesn’t follow predictable rules but functions through complex interactions and relationships that often escape the attempt of description via simple mathematical models. While org charts and processes do exist, the humanistic view accepts that these are solely simplistic attempts at describing how such an organization really works. This thinking is more in line with the theory of complex adaptive systems. Complex human beings are the building blocks of these organizations who deserve to be motivated and communicated to, their potential should be unlocked and they should be allowed to organize around problems and solve them. Instead of processes, we find emphasis on culture, values and principles. At its core, this point of view evolved from more recent research and thinking about how organizations, which are nowadays occupied predominantly by knowledge workers, function.

Which of these views is “right”? As Agilists we certainly gravitate more towards the humanistic view. Nonetheless, both views are valid and valuable models describing organizations knowing that a model is itself defined as a (over-) simplified representation of an entity, so it can never be fully accurate. At the end of the day, both these views can prove useful given the right circumstances as long as we deliberately choose which one to use and understand its potential shortcomings. I do believe, though, that the humanistic view pays better tribute to the complexity of today’s world. What gets us in trouble is when, based on traditional management training, we are hard-wired to only take the mechanistic view without being able to acknowledge the complex inner workings of today’s businesses and that in the end we need to trust and rely on people to make our organizations successful.